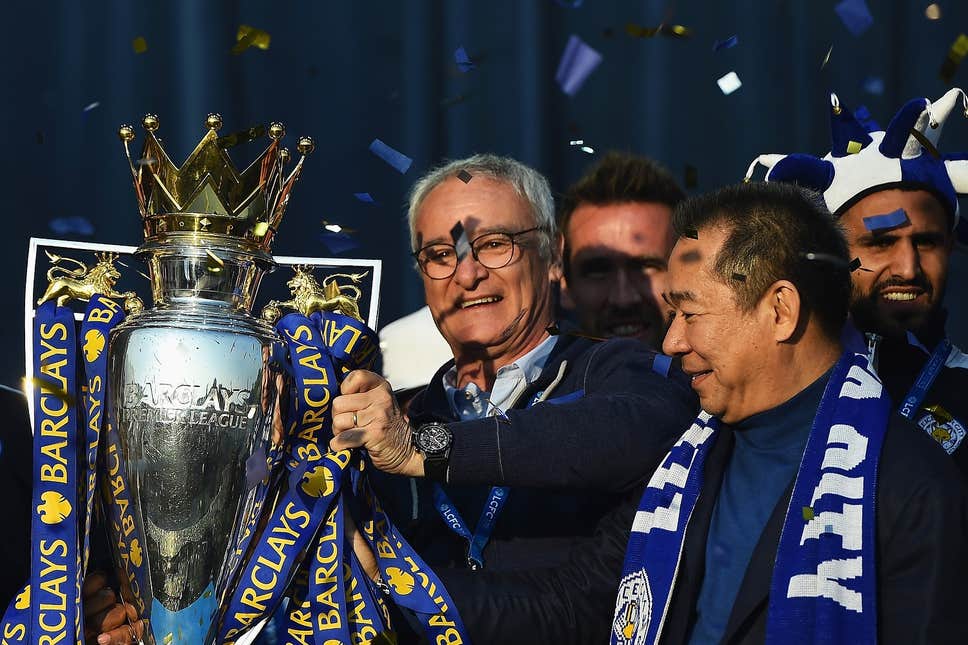 (LEICESTER) — The Thai billionaire owner of English Premier League team Leicester City was among five people who died after his helicopter crashed and burst into flames shortly after taking off from the soccer field, the club said Sunday.

“The world has lost a great man,” Leicester said in a statement. “A man of kindness, of generosity and a man whose life was defined by the love he devoted to his family and those he so successfully led.” 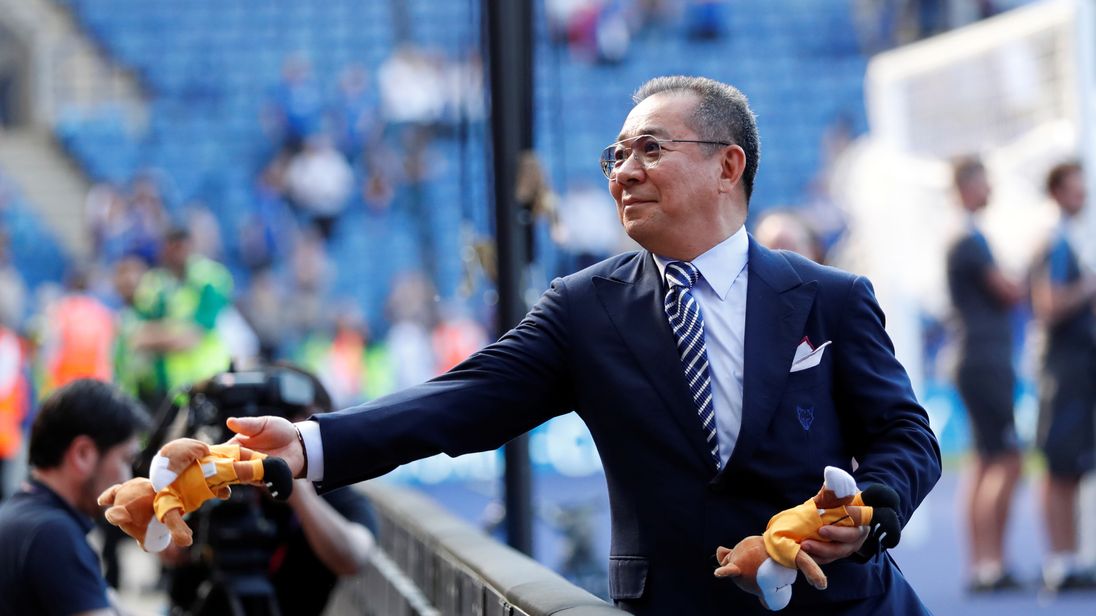 Vichai bought Leicester for $50 million in 2010 when it was in the second-tier Championship and funded the revival that peaked with the 5,000-1 outsiders producing one of the greatest upsets in sports by winning the title.

“It is a spirit that has spread beyond Leicester, taking our story to the hearts of the world. Our spirit exists because of the love we share for each other and the energy it helps to create, both on and off the pitch, and in the years to come, it will continue to be our greatest asset.”

Vichai was ridiculed for hiring the manager who masterminded the title success. Claudio Ranieri had been out of work since being fired by the weak Greece national team and his only job in the Premier League at Chelsea ended 11 years earlier. But it proved to be an inspired recruitment, helping to turn a humdrum group of journeymen and modestly purchased signings into a side that overpowered the mega-rich giants of the Premier League.

Leicester’s players were rewarded handsomely for winning the Premier League. New bumper contracts were handed out and Vichai bought each player a BMW i8 worth around $135,000, including for goalkeeper Kasper Schmeichel.

“You changed football. Forever,” Schmeichel wrote on Twitter. “You gave hope to everyone that the impossible was possible. You literally made my dreams come true.”

Vichai, who started with one shop and grew Thailand’s massive King Power duty-free chain, was known for arriving and leaving the stadium in central England in his helicopter.

After Saturday’s game against West Ham, the helicopter took off from the center circle on the field and cleared the stadium roof before plummeting to the ground in an adjacent carpark in a ball of flames.

“It is likely to take several days to fully complete the necessary work and to safely deal with the scene of this tragic accident,” Leicestershire Police Superintendent Steve Potter said.

Leicester’s next game, which was scheduled for Tuesday against Southampton in the League Cup, has been postponed.

“Everyone at the club has been truly touched by the remarkable response of the football family, whose thoughtful messages of support and solidarity have been deeply appreciated at this difficult time,” Leicester said.

With fans already fearing the worst, a makeshift shrine formed from early Sunday outside the stadium named after Vichai’s King Power company. Among the hundreds of visitors was a group of young footballers from Thailand on a trip to England who knelt on the ground and bowed their heads in front of the carpet of tributes.

“Without you the dream wouldn’t have become reality,” read one message on a club flag on the spot where fans gathered two years ago to celebrate the team’s first English title in its 134-year existence.

Life-long supporter Ian Hubber wrote a message on a hat commemorating the title win to place among the flowers. 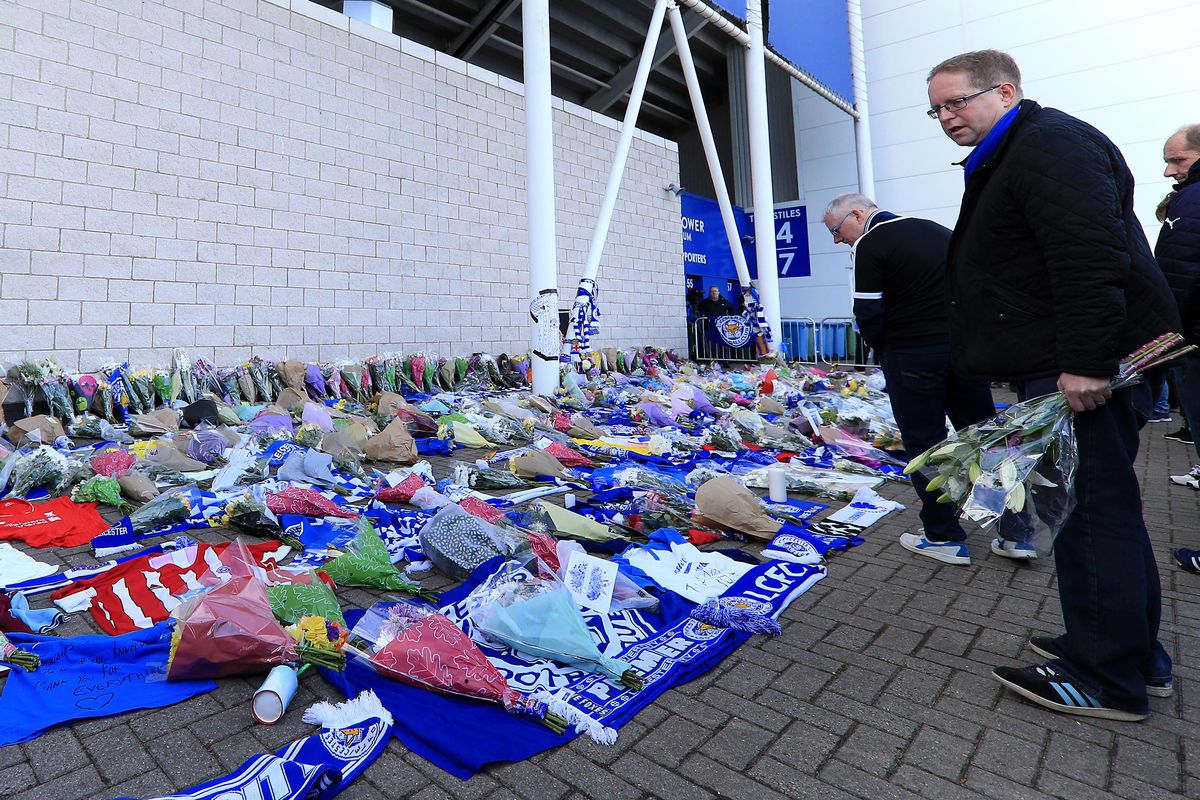 The outpouring of emotion at the stadium on Sunday reflected how highly the ownership is regarded in the city, which has only one professional soccer team. Vichai has formed a close bond with the fans, sometimes mingling with them at games, in contrast to some Premier League owners who maintain a distance.

Vichai has been praised for his charity work, donating 2 million pounds ($2.5 million) toward a new local children’s hospital, and he often provided free beer and food for fans outside stadiums.

“They’ve brought so much to the club, and given the fans so much to like them for,” said Ian Bason, chairman of the Foxes Trust supporters’ group. “And not just that, because they’ve also invested in the local hospitals too. So they’ve done things well outside what most football club owners would do.”

Through the ownership, Leicester gained new fans in Thailand where they mourned Vichai’s sudden death.

“It’s Thailand’s team,” soccer fan Chatworachet Sae-Kow said in Bangkok. “It brought fame to Thailand when they won (the title). He carried the Thai flag with him and made people know more about Thailand, so I felt sad.”